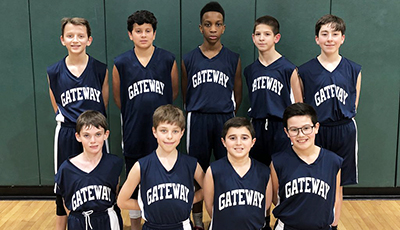 The Gateway boys JV basketball team completed the first undefeated season in school history by beating City and Country School Wednesday evening in the Middle School Athletic League’s championship game! Advancing to the championships for the first time since winning the league title back in 2012-2013, the Lions took an early lead in Wednesday’s match and maintained their position throughout the game, winning 48 to 26 and making school history in the process! The players had a terrific season, came together as a team, and consistently worked hard to accomplish this incredible feat. A special thanks to Coach Joel Perez and Assistant Coach Genaro Cruz for their leadership, direction, and enthusiasm which helped make this season so successful. And congratulations to the boys on a truly historic year!