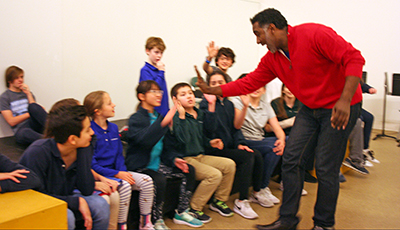 High fives all around from Mr. Norm Lewis! Middle School students in the cast of “The Who’s Tommy” musical were lucky enough to receive feedback from original 1993 Broadway cast member of “Tommy,” Norm Lewis. The Broadway star is known for many impressive roles, including King Triton in “The Little Mermaid,” Billy Flynn in “Chicago,” and Javert in “Les Misérables.” Norm was also the first African American to take on the lead role of The Phantom in “The Phantom of the Opera” on Broadway. Most recently, Mr. Lewis was seen in the NBC television special, “Jesus Christ Superstar Live in Concert!,” alongside John Legend and Sara Bareilles. He is also known for his recurring role on the hit drama, “Scandal.” The Gateway cast of “Tommy” performed “Pinball Wizard” for Norm and listened attentively to his notes and suggestions. Thank you so much, Mr. Lewis!