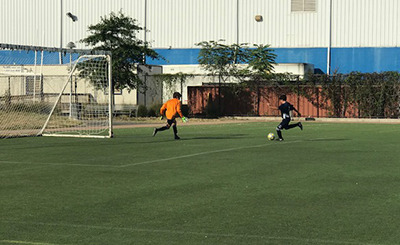 The Gateway Lions won their season opener in exciting fashion against Brooklyn Heights Montessori, 3 to 2. After BHMS took an early 1-0 lead in the opening minutes, Gateway scored a goal off a rebound to tie the game at 1-1. In the second half, BHMS came out strong and scored within the first five minutes to lead 2-1. But the Lions’ defense remained resilient, fending off several more scoring attempts to stay within striking distance. With just five minutes left, Gateway scored again with an unassisted goal from about 30 yards away, to tie it at 2-2. The eventual game winner occurred with a beautiful pass and a successful shot with only one minute left. The Lions closed with a strong defense to preserve the victory. Go Lions!