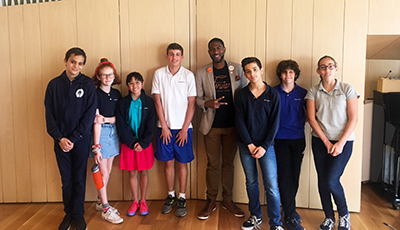 Thank you so much to New York City’s Public Advocate Jumaane Williams for speaking to our Lower and Middle School students yesterday! Our own Middle School Student Advisory Council wrote a letter to Mr. Williams asking him to speak at Gateway, believing he could be a wonderful role model to our students as an important elected official who has been open about living with ADHD and Tourette Syndrome. PA Williams spoke to Gateway students about his work in government, embracing his disabilities, the teachers that inspired him, and, of course, who everyone’s favorite Marvel superhero is!