Lulu is a Rhinoceros 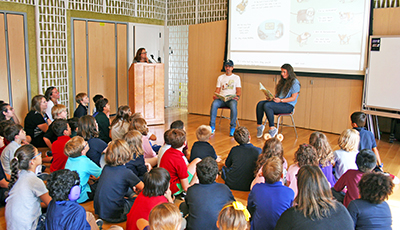 The Gateway School was founded in 1965 by Elizabeth Freidus and Claire Flom. Elizabeth Freidus was an educator at Columbia University Teachers College, and Claire Flom was the mother of Gateway’s first student – Peter Flom, ’68. This past year, Jason Flom – brother to Peter and son of Claire – wrote the charming children’s book, Lulu is a Rhinoceros, along with his daughter, Allison Flom. The book follows Lulu’s adventure through the big city as she learns how to be true to herself and know who she really is on the inside despite how others may judge her outward appearance. Yesteday, the Lower School received a memorable visit from Jason, Allison, and the star of their book, Jason’s bulldog Lulu. Our Lower School students were lucky enough to have an exclusive meet and greet with Lulu herself and hear a personal reading from the authors – the son and granddaughter of Gateway’s founder. It was a truly special experience, and we hope everyone enjoys Lulu’s beautiful story.