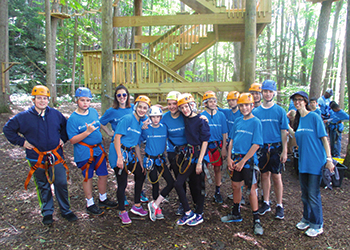 The third annual Teamwork Adventure took place on September 15 at Club Getaway, an all-inclusive adventure camp overlooking the Berkshire Mountains of Kent, Connecticut. All students in grades 5-8 participated in this full-day, outdoor retreat, which emphasized respect, communication, and leadership and established a strong sense of community at the start of a new school year. Students enjoyed climbing walls, icebreaker activities, ziplining, and large group games under sunny skies and fresh air. Visit our Facebook photo gallery to learn more. 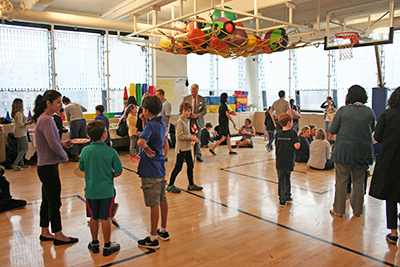 Rain didn’t dampen the spirits of the Lower School families who joined us for the Annual Lower School Welcome Back Picnic on Sept. 6, hosted by the Gateway Parents Association. Students, siblings, parents, and caregivers gathered and enjoyed each other’s company at various locations throughout the school. The PA provided lunch and families brought picnic blankets and games. It was a great way to kick off the new year and get to know fellow classmates and their families. Thank you to the PA for hosting such a well-attended and successful event.

On June 15, Gateway students and staff participated in the 9th annual Field Day. The event took place in Riverside Park with gorgeous views of the Hudson River and sunny weather. Students split into teams of navy, cyan, green, and yellow shirts, and they rotated among five stations that included relay races, ring tossing, potato sack races, bucket stacking, and hula hoops. In addition, plenty of watermelon was on hand for a refreshing snack.

Click here to see a photo gallery on Facebook. Also, watch a time-lapse video of the bucket stacking challenge. 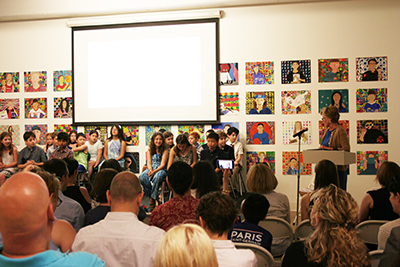 On June 14, the Lower School recognized 20 students who will be moving on to middle school next year, whether at Gateway or beyond. Each student made remarks in front of friends and families, and received a certificate for successfully fulfilling the academic requirements of the Lower School. The Moving Up Ceremony was followed by class parties in each of the classrooms. We will miss seeing you in the halls of the Lower School, but we look forward to you joining the 5th grade in the fall! 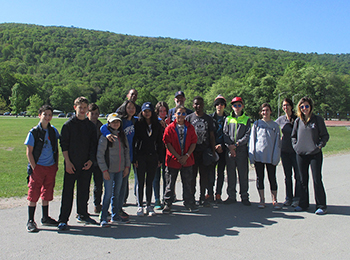 From May 31 to June 2, members of the 8th grade participated in an annual trip to Frost Valley camp in upstate New York. During the trip, students applied the content and skills learned in Science and took part in various challenges and outdoor adventures, such as canoeing, hiking, swings, and zip lines. They also reflected on the personal and academic growth they have experienced while at Gateway. This trip was designed to emphasize reflection, communication, and leadership in order to provide a meaningful, culminating experience for students graduating from the Middle School. Click here to see a photo gallery on Facebook. 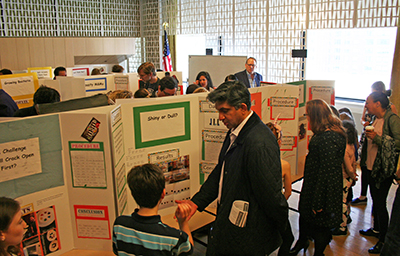 On May 12, the oldest students in the Lower School held a Science Fair in Grandstand for an audience of parents and fellow students. Earlier in the semester, each student chose a research question to investigate using the scientific method. Examples included “Do humans or dogs have more bacteria in their saliva?”, “Does soda clean pennies?”, and “Do certain colors of M&Ms melt faster than others?” At the Science Fair, students presented their hypothesis, materials, procedure, results, and conclusion, and answered questions from guests. Job well done to our cadre of budding young scientists.

The Gala on April 20 was a great success! Thanks to everyone who attended and contributed to Gateway. Departing from tradition, the event featured a festive Western theme, complete with country music, cowboy hats galore, and even a mechanical bull. The funds raised through sponsorships, ticket sales, and the silent, live, and reverse auctions represent an inspiring commitment from our community, ensuring that our unique educational program will be available for current and future generations of bright children with learning differences. Special thanks go out to all of our generous Sponsors, The Joseph H. Flom Foundation, the Gala Committee, and especially Gateway parent and trustee Melissa Lis for chairing this year’s Gala.

Watch an inspiring video shown at the Gala, and browse through the Facebook photo gallery. 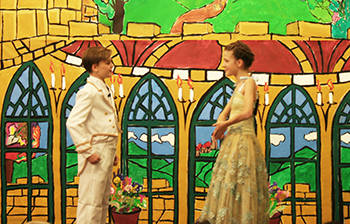 The Middle School musical was once again a great success! Featuring a cast of 16 talented students in grades 5-7, the production of Rodgers and Hammerstein’s Cinderella played to a full house on both April 12 and April 13. As part of the after-school program, the students worked diligently since September to master their lines, songs, and choreography, with great results. The many parents, siblings, friends, and relatives in attendance were thoroughly entertained.

Thanks to the dedicated Arts faculty, the student crew and artists, staff assistants, and the parents who helped with costumes and the cast party. It truly was a team effort. Click here to see a Facebook gallery.

Visit gatewayschoolgalaauction.org to view all the fabulous items in the silent auction benefiting the Gateway Gala! From travel packages and one-of-a-kind experiences to artistic pieces and designer goods, you’re sure to find something amazing for yourself or your family. You can bid anytime between now and 9:30 p.m. on April 20, 2017. If you haven’t purchased your Gala tickets yet, be sure to click here for tickets.

Join Us for the Gala on April 20

We’re excited for The Gateway School’s Annual Gala, which will take place on Thursday, April 20, 2017 at Tribeca Three Sixty. This western-themed event will be an evening to remember! It will include a Gala reception, silent and reverse auction, DJ and dancing, and delicious (and abundant!) food and drinks.

Individual tickets are on sale now—we are excited to offer a special early bird price this year. This offer is only available until April 5, so please consider purchasing your tickets early. (Note: Registration is required to purchase online.)

Sponsorships are available at the Diamond, Platinum, Gold, Silver, and Bronze levels. Each comes with its own set of benefits, including tickets, and choosing to be a sponsor is an incredible way to show your support.

The Gala is the biggest fundraising event of the year for Gateway, and we hope you will join in the celebration with our entire community. 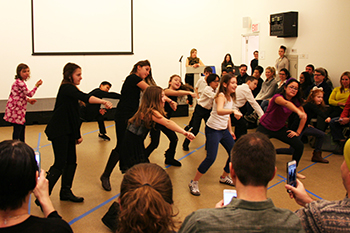 The four youngest classes in the Lower School will have their turn on April 28, and the Middle School Arts Festival is tentatively slated for May 25. 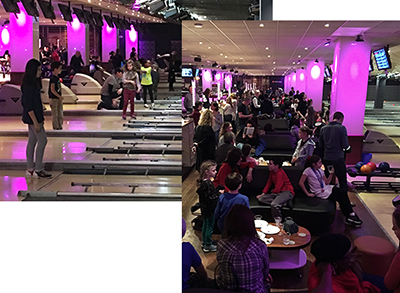 The Parents Association’s annual Bowling Party was a great success, with over 150 people (parents, students, siblings, caregivers) coming together for a fun Sunday morning on January 29. It was the highest attended bowling party in recent memory.

Thank you to parents Paula Weiss and Helen Brown for organizing the event. To see more photos, visit the Facebook gallery. 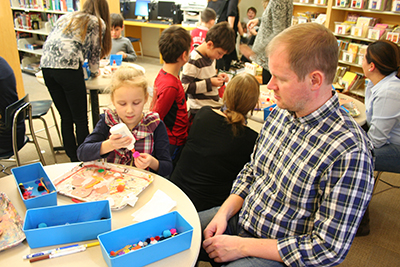 In anticipation of the holidays, the Lower School invited parents and caregivers on December 9 to enjoy crafts, snacks, and games with the students. Gingerbread people, snow in jars, and jingle bells were all part of the festivities.

A big thank you to the Class Parent Representatives and the Lower School teachers for organizing this annual event. The Middle School will have its turn with a holiday party on December 16. 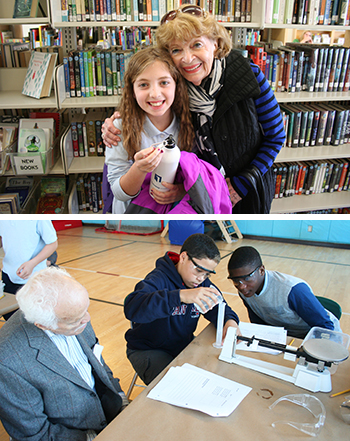 Gateway invited grandparents and special friends to the school on Nov. 17 (Lower School) and Nov. 18 (Middle School). Guests enjoyed a reception and choir performance in Grandstand, followed by visits to the their student’s classrooms where they engaged in art, science, writing, and more. The event also included a visit to the School Store, the proceeds of which benefit the Parents Association.

Thank you to all parents who volunteered as greeters and as School Store managers. The school enjoyed hosting these special someones in our students’ lives. The prize for farthest distance traveled goes to the grandparents who flew all the way from India! 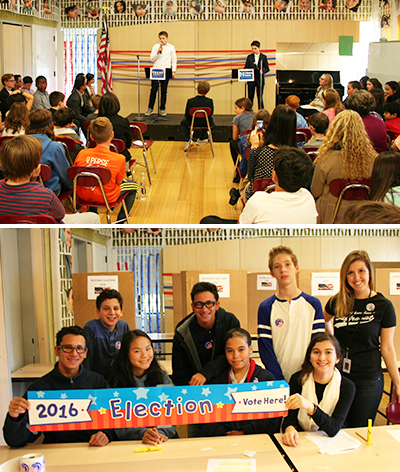